Hit enter to search or ESC to close
Blog 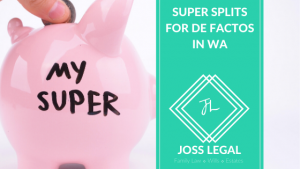 Many West Australia’s are unaware of the fact that WA has been lagging far behind the rest of the country when it comes to de facto couples and financial separations. Within WA there is a growing number of West Australians in a de facto relationship. Under proposed changes to the laws for how superannuation is dealt with in property settlements, separated de facto couples will soon be able to split their superannuation as part of their property division.

For many Australians superannuation is considered one of the main assets after the family home. It is believed many women have been disadvantage in property settlements particularly in circumstances where they have been out of the workforce to raise children. The proposed changes will no longer allow for working mothers to be financially disadvantaged if they have been unable to work while raising their family.  In all other Australian state’s, superannuation is treated as any other financial asset in settlement matters.

HOW WILL IT WORK?

If no agreement between the parties can be reached, the court will decide the property division to be made at a court hearing.

The changes to the law will allow de facto and married West Australian couples to have the same rights when it comes to splitting superannuation, following the breakdown of a relationship. Federal Attorney Christian Porter announced today that the Government will make amendments to the Family Law Act 1975 which will allow superannuation to be split before it has vested. This will mean that separating de facto couples in Western Australia will be treated fairly and consistently with other de facto couples across Australia. It was intended that the legislation would come into effect early 2020. Unfortunately at this stage it is still not in place and only time will tell when these changes occur.

We will keep you updated as we know more about the exciting changes to the superannuation splitting law in Western Australia.